There’s a wonderful little character moment in Glass Onion: A Knives Out Mystery, where Peg (played by Iron Fist alum, Jessica Henwick) joins in on the fun of smashing the collection of expensive glass sculptures in Miles Bron’s living room.

The put-upon assistant to Kate Hudson’s Birdie Jay picks up a circular piece and drops it to the floor with a look of utter shock and disbelief on her face. After being constantly shot down and ignored by people in positions of power, she can’t help but be caught off guard by her own bravado. Okay, now what if we told you this moment was not actually planned by writer-director Rian Johnson?

“We start rolling the camera, and I’m saying to her, ‘Okay, we want to get this exactly right. We only have one of these. And so what I’m going to do is I’m going to say one, two, three.’ She drops it and then looks right into the camera and does this [makes a shocked face]. We had started the camera just to practice the thing. She broke it and then looked right in the camera. That’s the take that’s in the movie,” the filmmaker revealed during an interview with Entertainment Weekly. 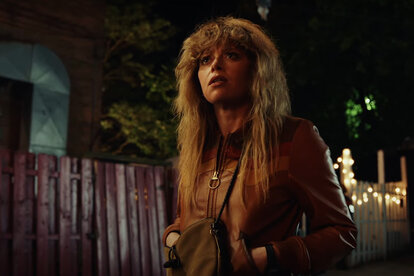 While this turned out to be one of those happy on-set accidents you just can’t plan for, Henwick was absolutely shocked when it happened. “I broke into a cold sweat,” she admitted. “I still have nightmares about that moment.”

The destructive sequence is kicked off by Helen Brand (Janelle Monáe), the twin sister of Bron’s murdered business partner, Andi. Not surprisingly, the sculpture props were made in Europe out of sugar glass, a film-friendly substance that shatters like the real thing without the downside of lethal shards flying everywhere.

“I had so much fun that day,” Monáe recalled. “I pulled from all of my favorite characters like Riddler and the Joker. I only had two takes to do all of that because once you break that glass, it takes a lot to clean up. I had to really map out everything in my head and make sure that I was getting a different variety of smashing.”

Glass Onion: A Knives Out Mystery is now streaming on Netflix. It is currently the streamer’s third most-watched film (with over 200 million viewing hours from households around the world) after Red Notice and Don’t Look Up.

Johnson’s adoration for the mystery genre doesn’t end with the Knives Out mythos. The filmmaker has an entire murder-of-the-week series, Poker Face, coming to Peacock Jan. 26. Natasha Lyonne leads the project as “accidental detective,” Charlie Cale. Check out the official trailer here!

Looking for more gumshoe work in the meantime? All seasons of Columbo and Murder She Wrote are now streaming on Peacock. You can also check out all five seasons of the original Quantum Leap with Scott Bakula, as well as the 2022 NBC revival which was recently picked up for a new season. 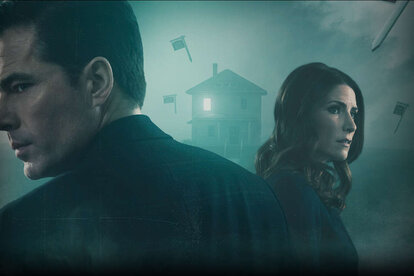 Join SYFY Insider to get access to exclusive videos and interviews, breaking news, sweepstakes, and more!