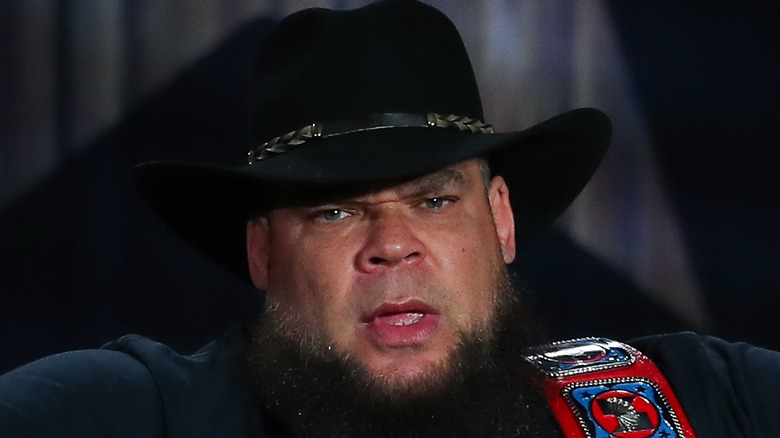 Eric Bischoff is familiar with the television audience, but also knows today’s media world can lend itself to polarity. There may be no more polarizing wrestler right now than the current NWA Worlds Heavyweight Champion Tyrus. Tyrus won the title at Hard Times 3 and many wrestling fans on social media took the opportunity to criticize the decision-making of NWA owner Billy Corgan. Bischoff weighed in on the latest episode of “83 Weeks.”

“Billy’s gotta be a little bit careful of how he deals with his public. He’s a bit of an eccentric guy and I like Billy,” Bischoff said, before pointing out that Tyrus is a major on-air personality on the Fox News late-night show “Gutfeld. I mean they’re beating ‘Kimmel’ and Tyrus is a big part of that show and comes out with his belt,” said Bischoff, bringing up that the former Funkasaurus takes the time to present the “10 Pounds of Gold” right in front of him during the show.

“If you’re Billy Corgan or anybody else are you not going to take advantage of that even if it does stir some people up cause guess what? ‘Controversy creates cash,’ you stir them up enough and people are going to tune in to see what happens next,” he added, stating that a lot of people today do like to complain, and Tyrus starring in a highly-rated show on the politically right-leaning Fox News only adds fuel to the fire. “You gotta at least let things play out before you start criticizing too much.” Bischoff went on to compare the Tyrus title run to a TV show that sometimes takes a few episodes to win over the audience. “While Tyrus has been around for a while, lets see what creative does for him before you start putting him on the grill.”