“Her light however, like the ancient galaxies now being seen for the first time, will remain for us and future generations to enjoy, learn from, and draw inspiration,” he said. “Hers was a life well lived and as such a model for us all.

“I, and the rest of our family, would appreciate your patience and forbearance as we grieve her loss until we can recover sufficiently to speak further. Her services will be for family members and the closest of her friends and we request that her and our privacy be respected.”

William Shatner, who played Capt. James T. Kirk, mourned the loss of his co-star on Sunday.

“She was a beautiful woman & played an admirable character that did so much for redefining social issues both here in the US & throughout the world,” Shatner said on Twitter.

George Takei, who portrayed Lt. Hikaru Sulu on the series, tweeted that he would “have more to say about the trailblazing, incomparable Nichelle Nichols, who shared the bridge with us as Lt. Uhura of the USS Enterprise. 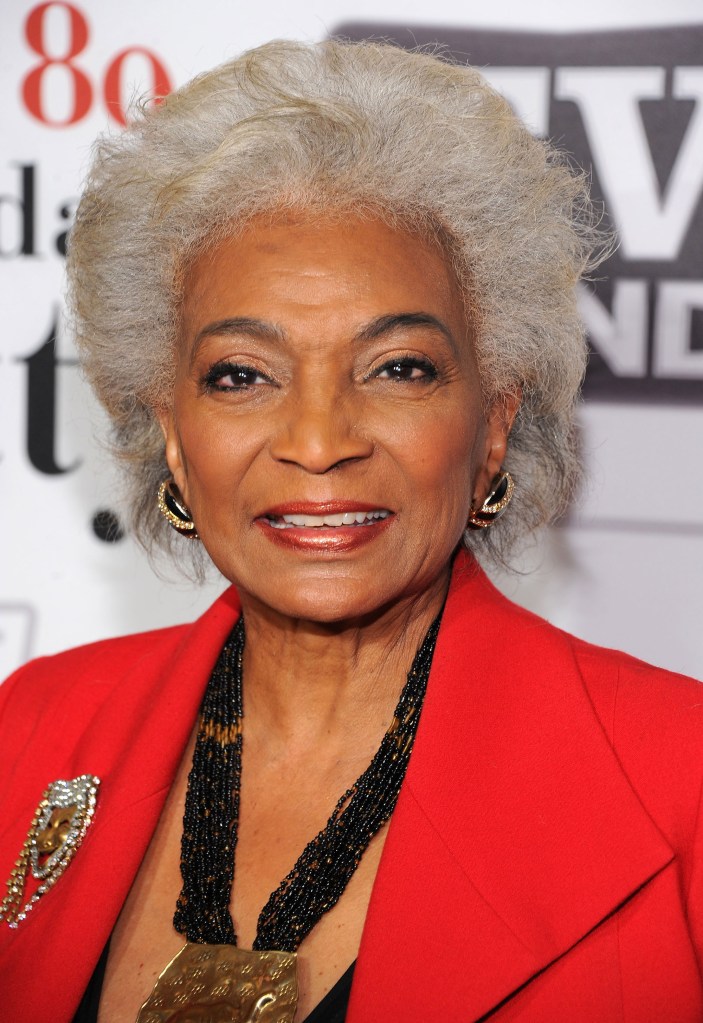 Her family announced Sunday on Nichols’ Facebook page that she died from natural causes.Dimitrios Kambouris/WireImage 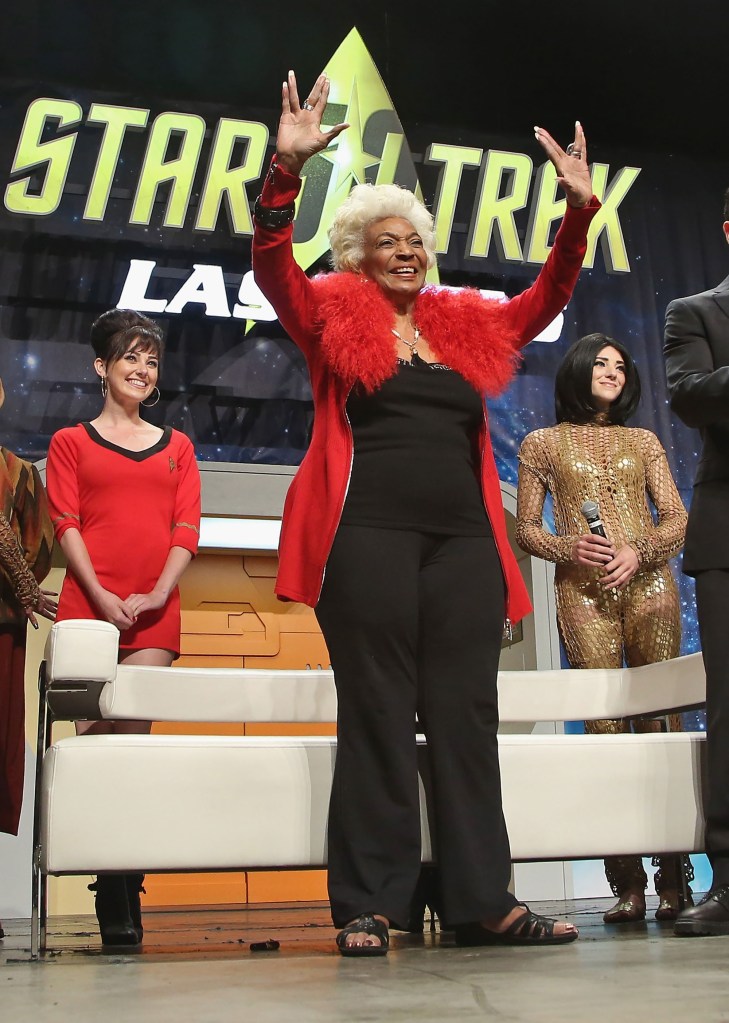 She regularly made appearances at “Star Trek” conventions and conferences.Getty Images/Gabe Ginsberg

“For today, my heart is heavy, my eyes shining like the stars you now rest among, my dearest friend,” Takei wrote.

“She was much loved and will be missed.”

President Biden called Nichols a “trailblazer of stage and screen who redefined what is possible for Black Americans and women.”

Nasa tweeted that Nichols “symbolized to so many what was possible.

“She partnered with us to recruit some of the first women and minority astronauts, and inspired generations to reach for the stars,” the US space agency said.

Nichols had been hired by the space agency in the 1970s to aid in recruiting and is credited with helping draw the first US woman astronaut Sally Ride and the first black woman astronaut Mae Jemison to the program.

Nichols’ “Star Trek” role broke stereotypes for black actresses at a time when black women were mostly portrayed in roles as servants rather than authority figures.

She was urged by the Rev. Martin Luther King Jr. in 1967 to stick with the series after she told him she had decided not to return for the show’s second season.

“When I told him I was going to miss my co-stars and I was leaving the show, he became very serious and said, ‘You cannot do that,’ ” she said to the Tulsa World in a 2008 interview. 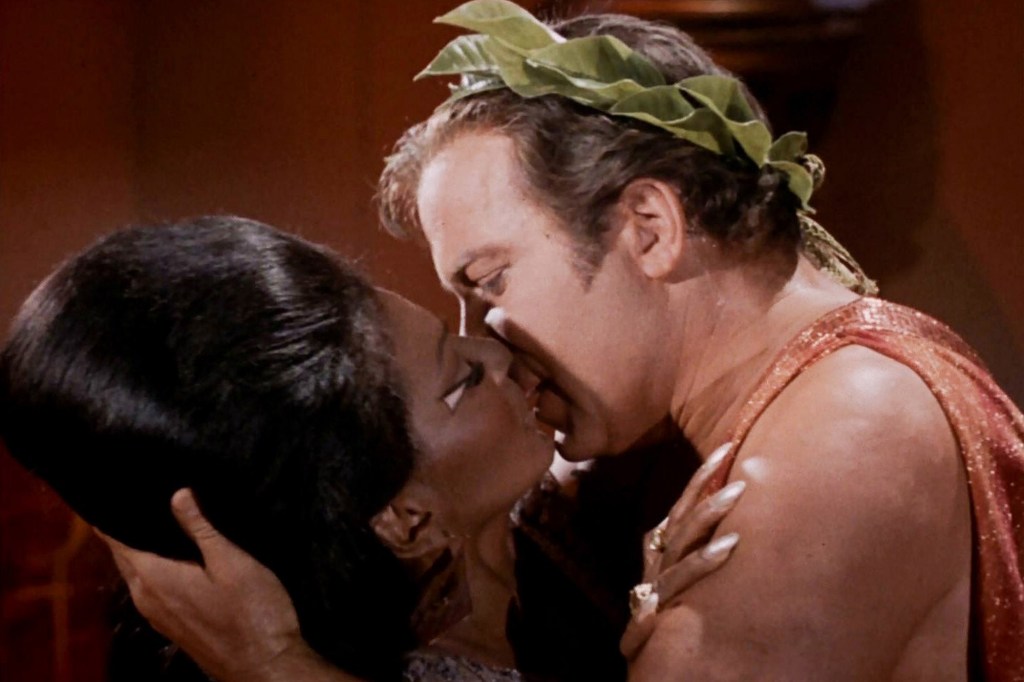 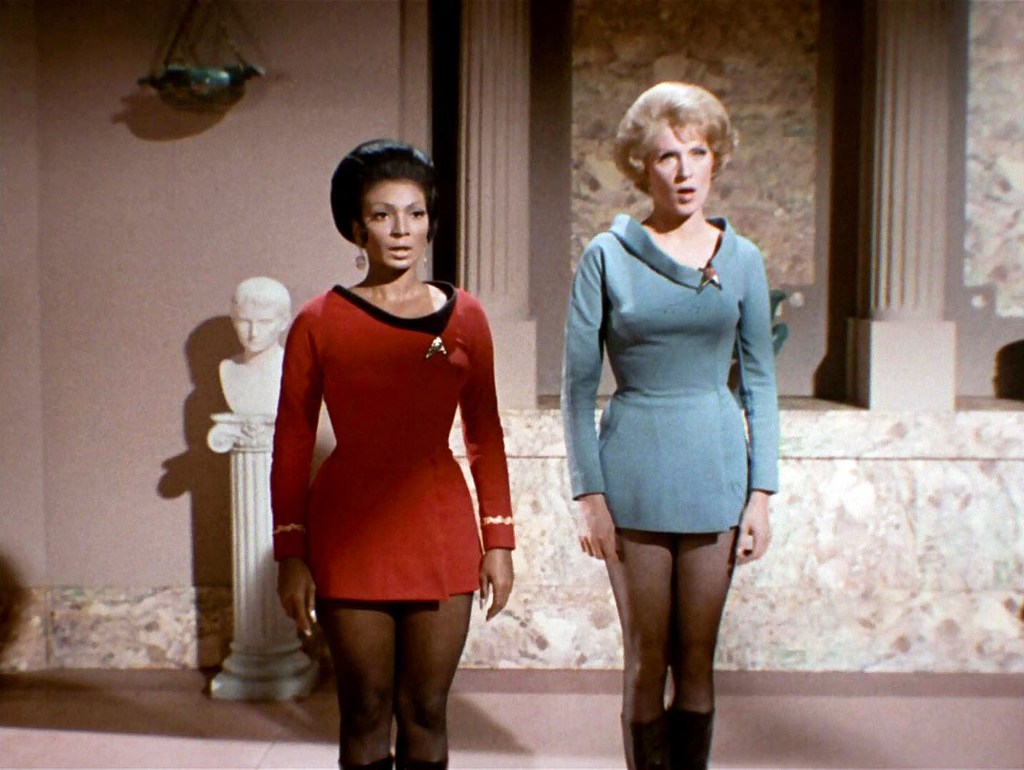 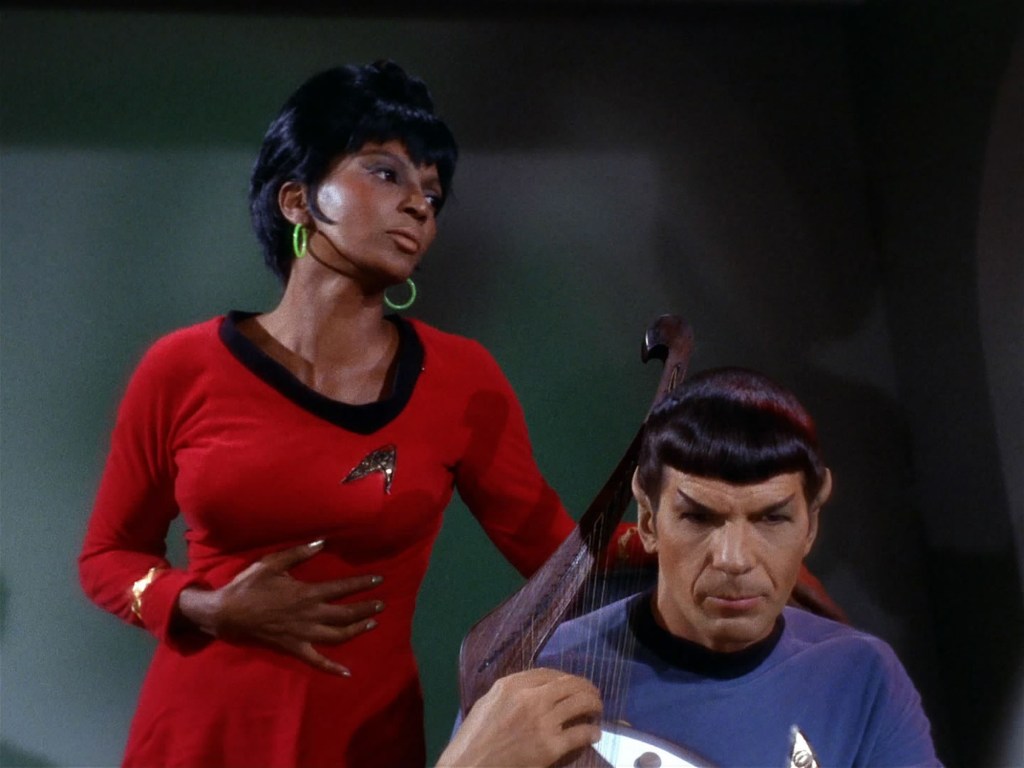 Nichols as Lieutenant Uhura and Leonard Nimoy as Mr. Spock in the “Star Trek” episode, “Charlie X.”CBS via Getty Images 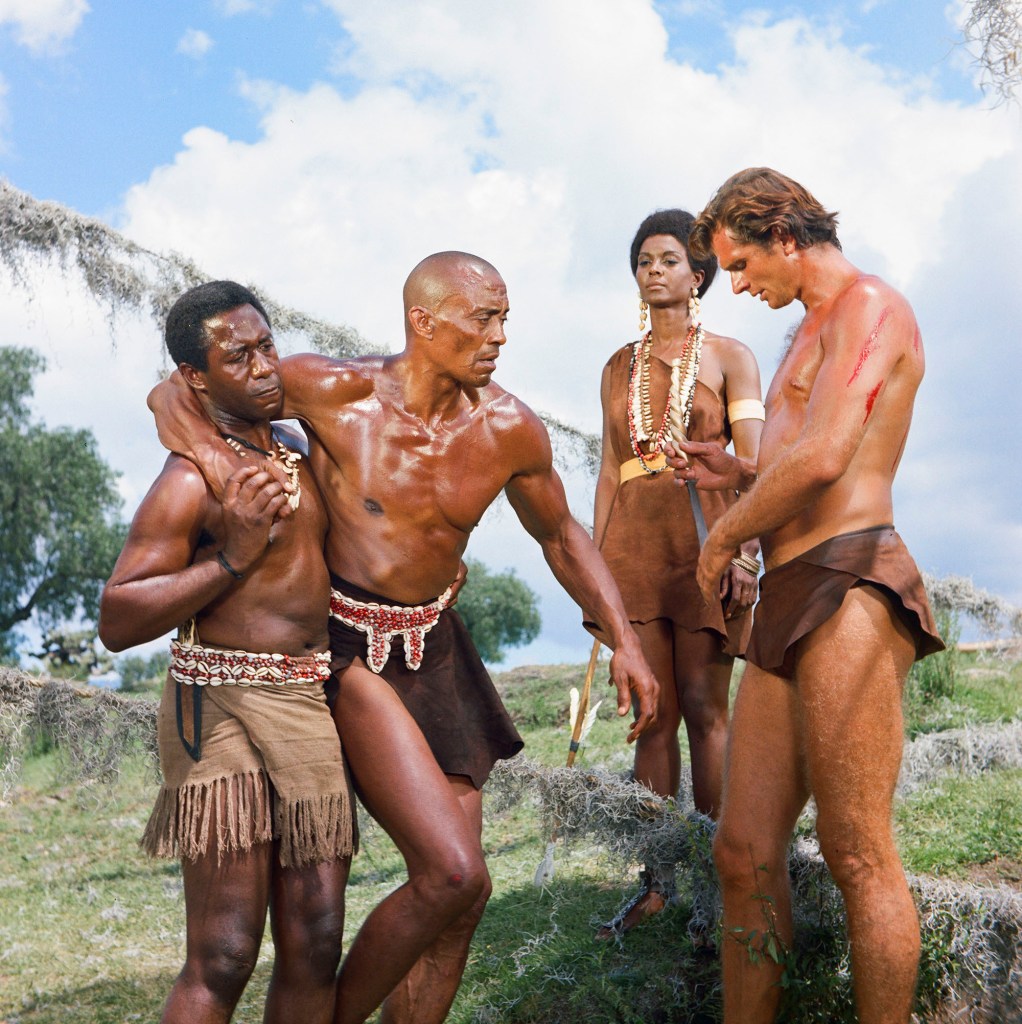 Nichols as Ruana in “The Deadly Silence.”NBCU Photo Bank/NBCUniversal

In one groundbreaking television moment, she and co-star William Shatner, who played Capt. James T. Kirk, shared an interracial onscreen kiss, which was unheard of at the time. The two characters always had a platonic relationship on the show but were forced by aliens controlling their brains to kiss in one episode.

Some of the people involved in production feared what the reaction from Southern television stations would be and wanted to film another take where the two kissed off-screen. But Nichols, in her book “Beyond Uhura: Star Trek and Other Memories,” said she and Shatner would then deliberately mess up their lines to force the original scene to be used.

The episode ended up resulting in the most “fan mail that Paramount had ever gotten on ‘Star Trek’ for one episode,” she said in a 2010 interview.

Nichols visited former President Barack Obama in 2012, and the two posed for a photo in the Oval Office while they both made the Vulcan hand signal. 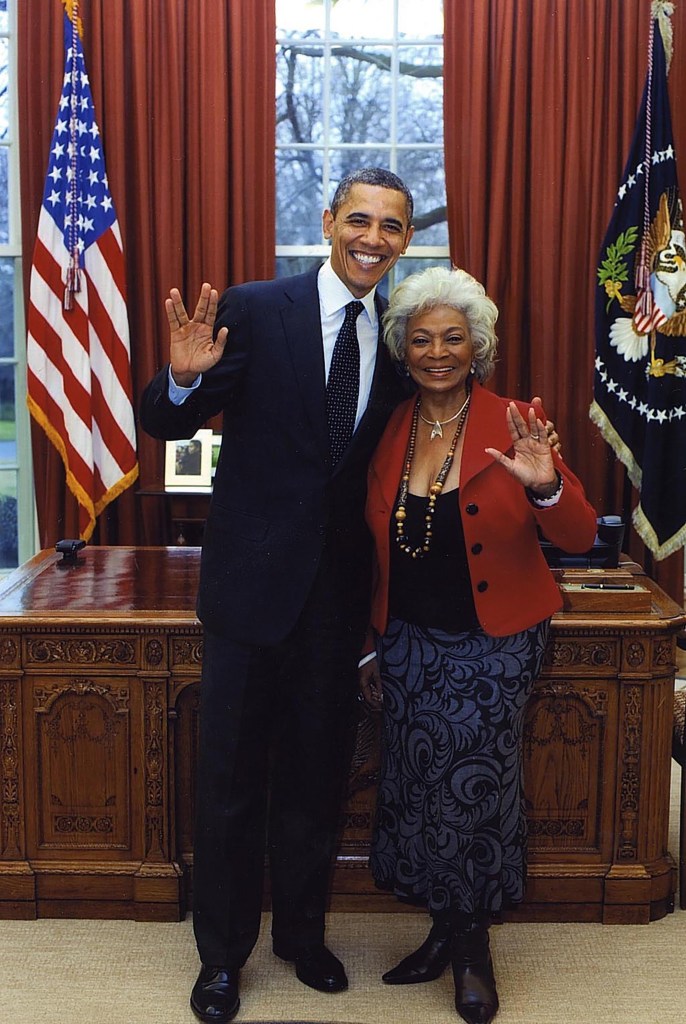 Nichols stayed active until she was diagnosed with dementia.Twitter 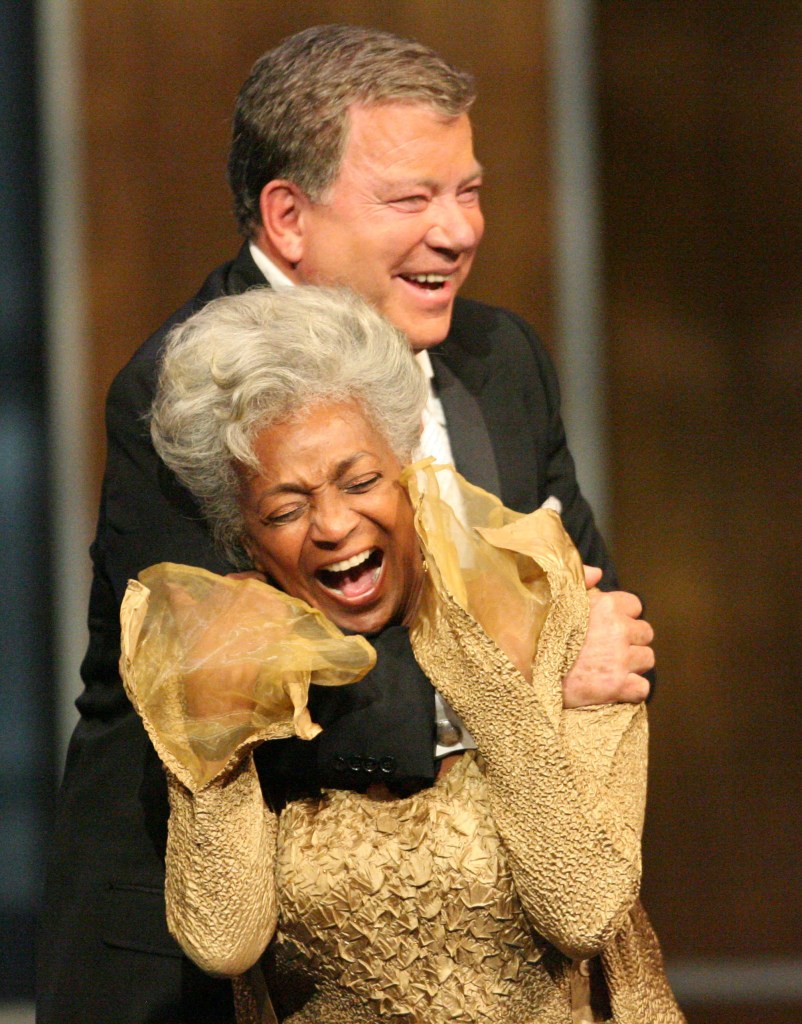 “She was much loved and will be missed,” Nimoy’s son Adam tweeted upon news of Nichols’ death.Jason Merritt/FilmMagic.com

She was born Grace Dell Nichols but changed her first name to Nichelle as a teen to have alliterative initials like other stars as Marilyn Monroe, who Nichols was a huge fan of.

She began her career as a singer and dancer in Chicago before heading to New York, where she worked for a time with Duke Ellington and Lionel Hampton bands.

She debuted in the film “Porgy and Bess” in 1959. It was one of several smaller film and television roles before she landed the “Star Trek” gig.

Starting in 1979, she appeared in the first of six of the series’ movie spinoffs along with other original cast members.

More recently, she appeared on the television series “Heroes.”

Nichols faced health issues in the past few years.

It was reported in 2018 that she was diagnosed with dementia. In 2015, she suffered a stroke.

Before her dementia diagnosis, Nichols continued to regularly be part of “Star Trek” conventions and events.

She was eventually placed under a court conservatorship that her son controlled, with Johnson saying her mental decline made it impossible for her to take care of herself or make public appearances.

But Nichols’ managers and friend Angelique Fawcett objected and fought for more access to the aging actress and Johnson’s financial records. A judge consistently sided with Johnson.

Nichols’ name was at times invoked at rallies in support of freeing Britney Spears from her conservatorship.