One of the most beloved characters in all of Demon Slayer (Kimetsu no Yaiba) is Inosuke Hashibira. Next, we tell you how he has evolved. Demon Slayer (Kimetsu no Yaiba) has become one of the best rated anime in recent yearsWell, although it manages a simple story and does not intend to revolutionize the industry, it manages to combine interesting elements, such as impressive battles, a soundtrack to match, another level of animation work, charismatic characters and much more. The latter is one of his strongest points.

In the franchise created by Koyoharu Gotouge, we can find all kinds of interesting, funny and deep characters. One of the most notable, and who has won the hearts of fans of the work, is Inosuke Hashibira, who has had a great evolution since he was first presented until the most recent arc, the Red District, and who it is interesting to analyze to understand how it will continue to develop throughout future seasons.

Next, we will tell you all the details about the evolution that the craziest and funniest protagonist of the saga has had.

The evolution of Inosuke Hashibira in the anime 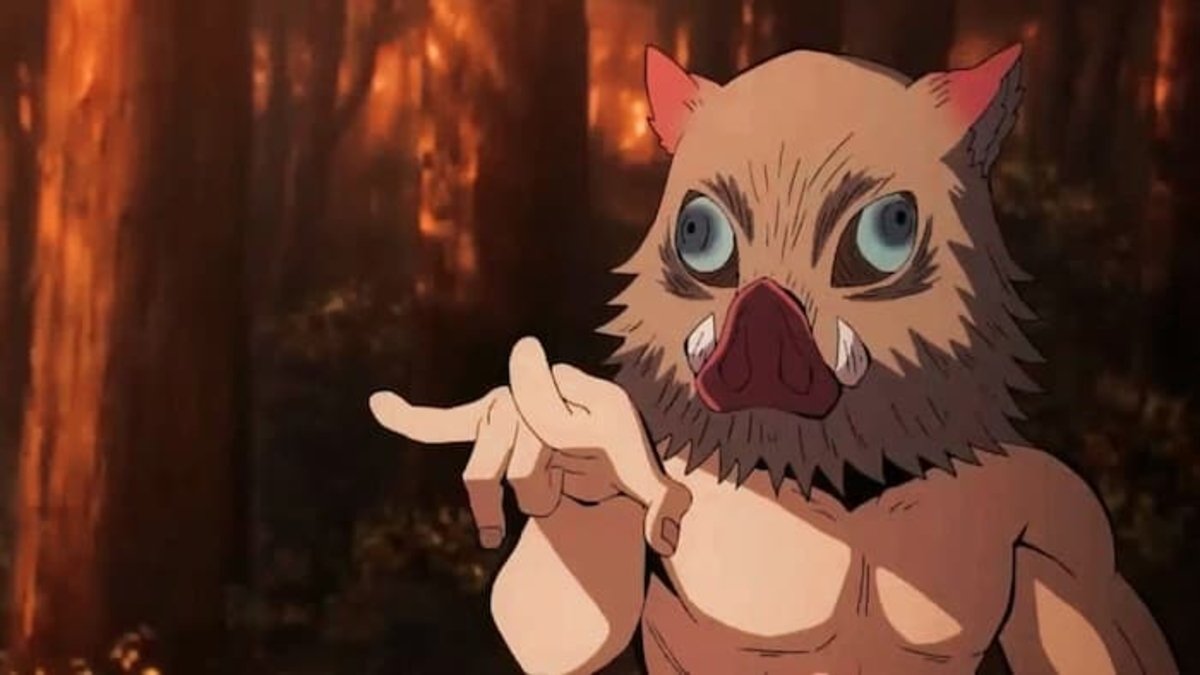 At first, Inosuke has so little respect for Tanjiro that he doesn’t pronounce his name correctly.

It is possible that Inosuke is one of the most interesting characters of Gotouge’s work, because when he was first introduced, it is possible that many fans hated him, since behaved like an animal and even went so far as to attack Tanjiro and Zenitsu. But little by little it has been winning the hearts of the entire community that follows the franchise. It is so much so that some fans have tattooed the boar-headed boy or have cosplayed him.

This shows us that Inosuke has had a very good development over time. Next, we will review all these details.

Later in the story, we find out that when Inosuke was a baby, his mother abandoned him to protect him, because it was persecuted by a demon. In this way, the little one was raised by wild boars, who taught him to defend himself. Later, the boar that acted as his mother would die, so he had no choice but to continue on his own while he grew up.

It is highly probable that, during all this time, Inosuke hasn’t interacted with many humans., but with animals, so he learned this violent behavior. He would eventually run into a young Demon Hunter, whom he easily defeated and took his swords from. In this way he found out about the Test to become hunters and passed the Final Selection.

Inosuke was introduced in the Tsuzumi Mansion arc. 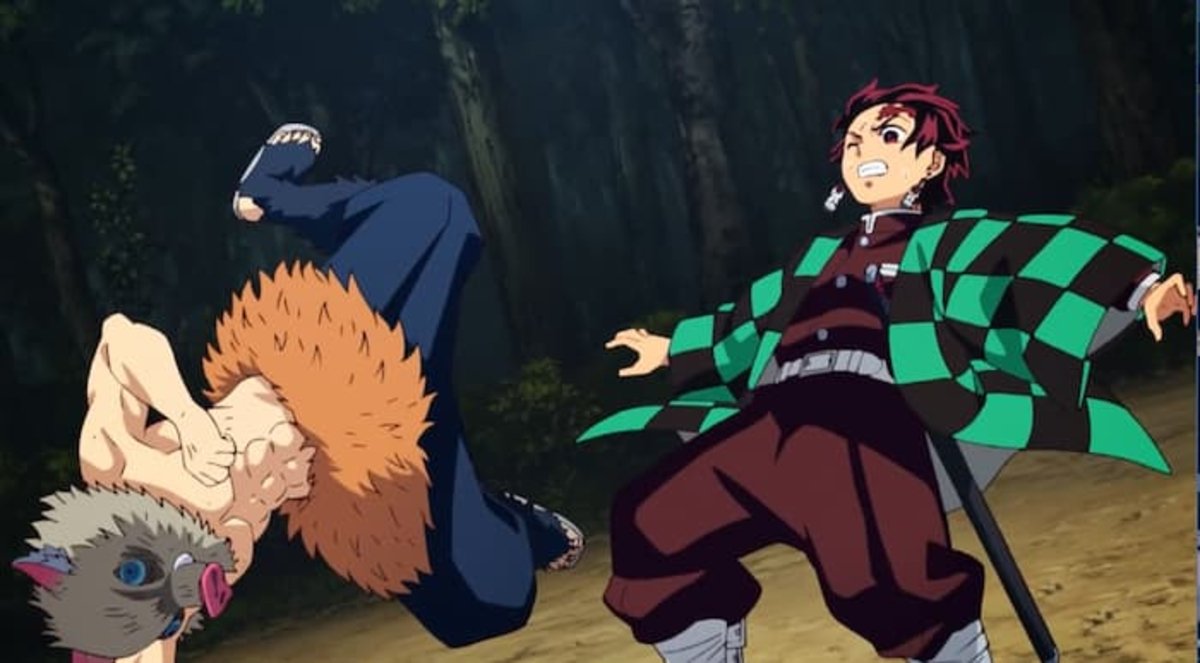 Inosuke fights against Tanjiro to show him that he is stronger

After Tanjiro and Zenitsu met and decided to work together, they headed off to their next mission, which led them to the house of the demon Kyogai, the Tsuzumi mansion. But none of them expected that a third member of the Demon Slayer corps would be found in this place: Inosuke.

During the battle against the demon Kyogai, who was expelled from the Demon Moons of Muzan and who had the Demon Art that allowed him to modify the internal structure of the placecausing the rooms to change places, Tanjiro meets Inosuke and discovers that he is a peculiar boy, since his most characteristic feature is that he had a boar’s head mask.

After defeating Kyogai, Tanjiro finds out that Inosuke is attacking Zenitsu, which protected the box that Nezuko was in. The young Kamado, against his will, ended up fighting the boar-headed boy and knocked him out. Thus begins their friendship.

From that moment on, the three young people team up and develop a friendship. Nevertheless, Inosuke was the most peculiar of allsince he did not trust anyone other than himself, in addition to having an insane obsession with proving that he was the strongest. 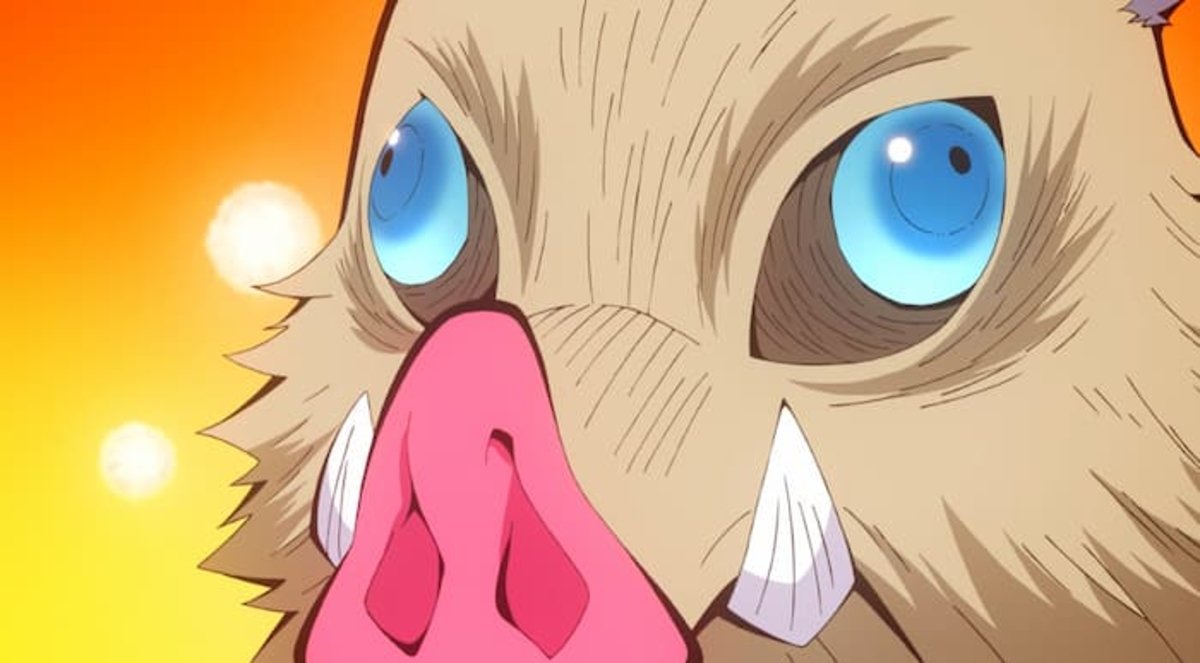 when the young they will recover from their injuries in the Wisteria houseThey discover that Inosuke is peculiar, because he has no manners or respect for anything or anyone. At this point in the story, the boar-headed boy has no bond of friendship with the other protagonists.

Although it is important to note that Inosuke apparently never been treated kindly, because when he met the old woman of the Wisteria house, he witnessed that she washed his uniform, made him food and, before they undertook their new mission, she dedicated a few words of encouragement to them. This is all new to young Hashibira, who I didn’t know how to react to it more than demonstrating confusion.

The Mission on Natagumo Mountain 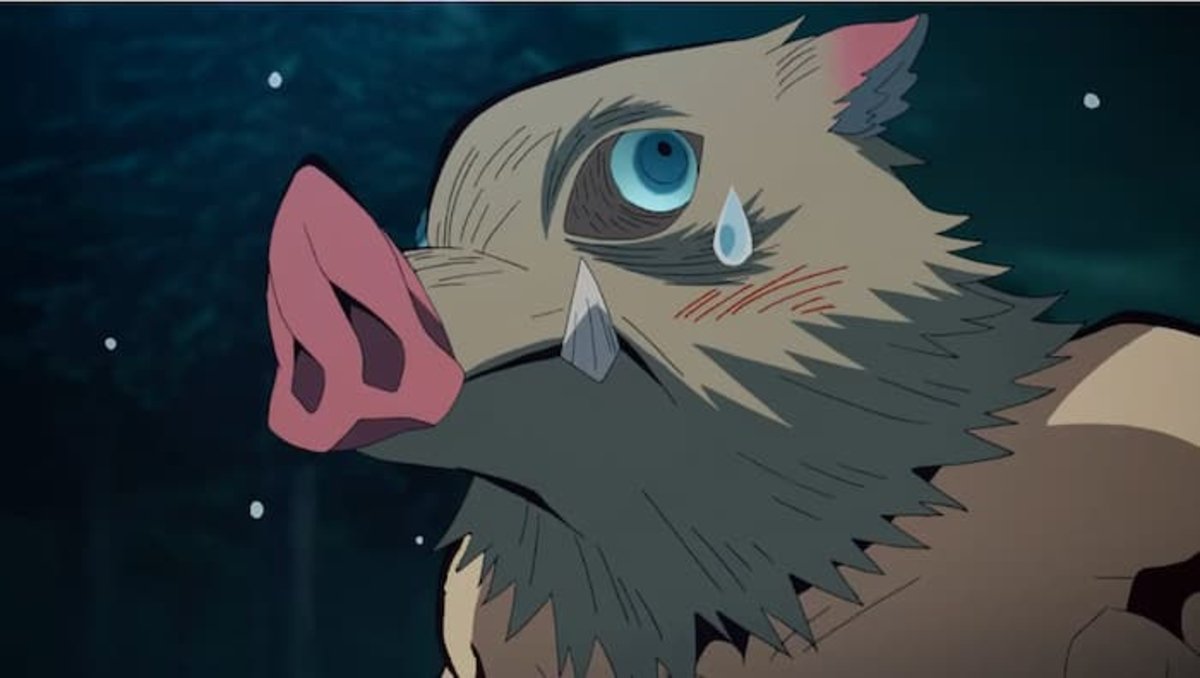 Inosuke worries about Tanjiro during his fight against the Spider-Father.

After recovering from his wounds in the Wisteria houseInosuke and company make their way to Natagumo Mountain, as there is a demon in the area.

At this point, we can see that Inosuke starts to open up a bit, as during his battle against the Spider Demon Familythe boar-headed boy shows concern for Tanjiro, especially when Father Spider knocks him out and sends him to another area of ​​the mountain.

In this whole arc, we got to see a little more about how Inosuke thought, who was confused by Tanjiro’s kindness, but also he was surprised by the feats that he showed In the battle. In fact, the Hashibira boy promises his partner that he will not die in this fight and strives to fulfill it.

At one point during the fight, Inosuke is about to be defeated by the Spider Father, so before giving himself up to death, he remembers his two companions, which gives him strength to launch one last attack desperate. This told us that he was beginning to recognize them as more than just comrades. 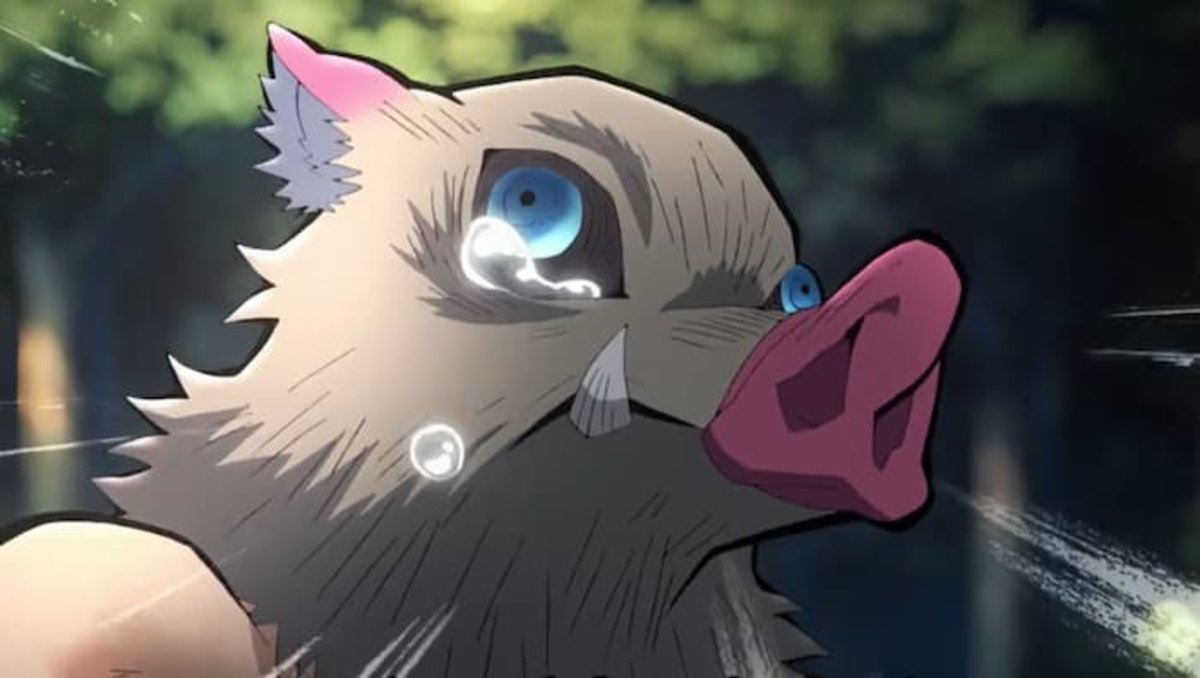 Inosuke cries after Kyojuro’s death, but tries to give his teammates words of encouragement.

After recovering and trained at the Shinobu Butterfly Estate, the trio of protagonists embark on their new mission. This time, it will be aboard a train where many humans have disappeared.

During this arc, we can appreciate that it’s the first time that Inosuke sees a train, so he looks surprised and intimidated, so much so that he recognizes it as a monster that he must defeat. This was a thought that he kept throughout the story arc and would later prove that he was not wrong.

At this point in the story, and through Inosuke’s dream, we can discover how does he see his teammatessince he considers himself as the leader of the gang.

Although the Infinity Train arc focuses on Tanjiro and Kyojuro, it’s undeniable that Inosuke had a big hand, demonstrating that his perceptual abilities were on another level. But that’s not all, because when the battle was over and the group was devastated by Pilar’s death, the boar-headed boy tried to encourage everyone else, inviting them to train to become stronger and do not allow his death to be in vain. All this in tears, showing that he now cared for others other than himself. 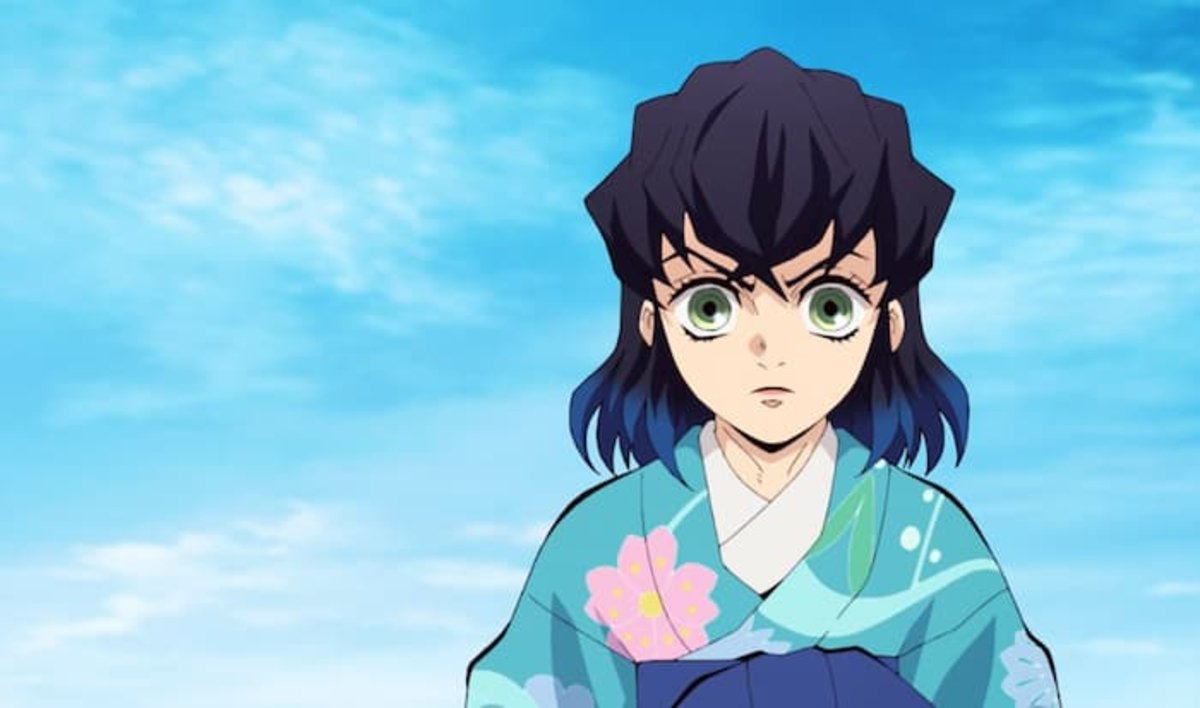 Inosuke meets with Tanjiro to share information during his mission in the Yoshiwara district.

After all the events that we have seen throughout the anime, now Inosuke considers Tanjiro and Zenitsu as his allies more important and closer. In fact, he respects them a little more, and we can see this during espionage missions.

In fact, in this arc we witness the development that Inosuke has had, since has taken very seriously the mission assigned to them by Tengen, so, after collecting information about what was happening in that district, he met with Tanjiro to tell him everything he knew. She no longer had those insane desires to fight him.

One of the characteristics that used to define InosukeAt first, it was his individualism, since he preferred to do things on his own. However, during the final battle against the demons Gyutaro and Daki, he showed that he was capable of teamwork.

In fact, this development of friendship that he has had is not only with Tanjiro, well teams up with Zenitsu to find young Kamado and later to fight Daki. Not to mention that, when he is needed or asked to do something, he does it without saying a word.

And the greatest proof of Inosuke’s development and evolution can be seen at the end of this arc, in which hugs his friends while they all cry with happiness for having survived the hard battle.

Definitely, this character has had a great development throughout the work and is now at a point where genuinely regards Tanjiro and Zenitsu as his friends. But it remains to be seen how the boar-headed boy will continue to grow.