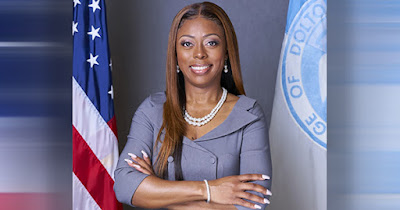 America is a country that’s been predominantly run by white men since its independence from Britain was originally established. That trend has not changed in the hundreds of years since. However, there have been small changes to this long tradition as more inclusive efforts have been made to diversify leadership roles in politics. Tiffany Henyard has etched her name in stone in America’s list of trailblazers.

According to Essence, Henyard was officially inducted as Dolton, Illinois’ first Black female mayor. With the assistance of her mentor, Frank Zuccarelli, Henyard was able to break through the glass ceilings that kept her from this respectable position. In the mentioned article, Henyard states, “What I valued most about his guidance is that he boiled politics down to one thing: caring about people.”

In her past, Henyard has shown her capability as a leader. This attribute later awarded her the position of town trustee. It wasn’t until 2020 that she would really set her sights on becoming a mayoral candidate. With the population on her side, Henyard’s campaign ultimately won with 82% of the voters’ support.

Henyard hopes to build her reputation further, using her position to better her community. She states, “for eight years I’d been advocating for what the residents truly deserve, which is sound leadership. As Mayor, I’m able to now put my vision in play from the major legislative moves to the smallest…I implement those initiatives because I understand what it’s like.”