Jujutsu Kaisen characters in the real world have a lot of style.

Due to the success of Jujutsu Kaisen, the manga series written and illustrated by Gege Akutami that has been running in Shonen Jump since March 2018 (and luckily for fans, it’s not finished yet), there have been a few collaborations between franchises that have enhanced the popularity of this fantasy and supernatural adventure series beyond the borders of Japan, its country of origin. And even those collaborations have reached another level after the luxury fashion house Dolce & Gabbana has been interested in releasing a joint collection with the Shonen. This collaboration will be based on the most popular Jujutsu Kaisen characters and each garment will have the most representative features of each one of them, merging the style of the manga with the designs of a specialist brand in high-end clothing.

A unique collection of Jujutsu Kaisen

Initially, this news took fans of the series by surprise (although it should be said that also those of the fashion line), since the possibility of this happening had not been fully contemplated previously. So where did the idea come from? Early last month, a pop-up store in Tokyo’s trendy Shibuya district called ZeroBase Shibuya, made an invitation addressed to fans of the series to discover and learn about the recent collaboration between Jujutsu Kaisen and Dolce & Gabbanawhere they would present a line of clothing and accessories that would have the touch of the fashion house and the successful franchise.

The details provided by the store greatly excited fans, as the collaboration aims to blend Dolce & Gabbana’s own style, influence and elegance with the popularity, creativity and magic of Jujutsu Kaisen characters to offer a original but meaningful experience to customers. In addition, another important aspect that they mentioned is that visitors will be able to appreciate an unpublished work of art from Sunghoo Park, the director behind the anime adaptation of Jujutsu Kaisen, which suggests that the fan community is in for a big surprise on their visit. And, following the official announcement, pop-up stores with a similar concept were opened in Tokyo’s Shinjuku and Osaka.

To take up the most important elements of the manga and make them a collection that is really different from other concepts that have been seen between franchises, Dolce & Gabbana initially proposed to maintain its essence, but add the aspects that define the characters of Jujutsu Kaisen and that has made them so meaningful to their fans. However, after the official publication of the sale of the collaboration, judging by the details of the clothing line, we can see that, indeed, the fashion experts have done a good job of rescuing the best details of the manga to achieve a great combination. In fact, one of the most accurate interpretations of the new concept offered by the collection is that of Maki Zekin (second-year student at the Tokyo Jujutsu Institute), where Dolce & Gabbana has perfectly captured its dark essence, but at the same time with hints of freshness typical of the brand.

In case you haven’t followed the series closely, Maki is a member of a clan of sorcerers that releases cursed energy in its entirety and has managed to stand out in the plot of the manga after developing some of the most powerful techniques. But what makes this iconic character important is not precisely his lineage or his sorcery skills, but rather that he possesses a unique mettle that has propelled him to triumph and earned him respect among his fellow clansmen. .

And, returning to the subject that concerns us, Dolce & Gabbana has interpreted the characters of Maki’s personality very well, turning them into a rather sober outfit that includes a white Oxford shirt that stands out for the elegance of its simplicity, combined with black pants. pleats And to add more formality to the fashion house’s style, accessories include a classic DG belt and rectangular glasses, a reference to the ones worn by Maki in the manga. To close with a flourish, the ensemble is completed with Dolce & Gabbana Cardinale Crystal Embellished Boots. In this way, the energy that Maki’s style gives off reinforces the toughness of her character and shows that Jujutsu Kaisen characters can also dress fashionably while fighting their enemies. 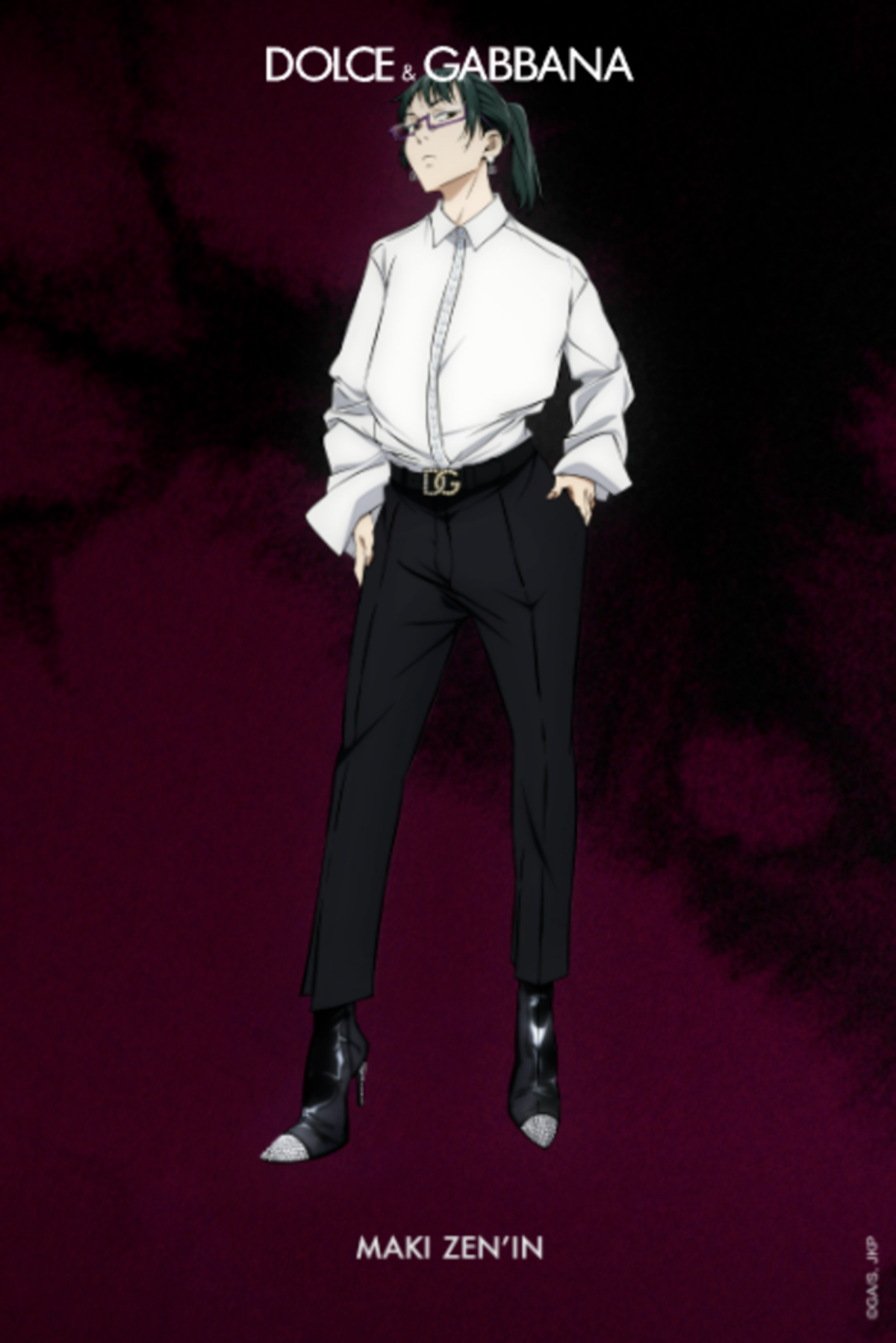 By last, Maki is not the only one appearing in this collaboration, we also have Yuji Itadori, Megumi Fushiguro, Nobara Kugisak, Toge Inumaki, Kento Nanami, Panda and Satoru Goju..

The Jujutsu Kaisen and Dolce & Gabbana special collection is now available in select boutiques in Japan.