The conflict between chief stew Aesha Scott and chef Ryan McKeown has been simmering all season long on Below Deck Down Under, and it boiled over in Episode 6 of the Peacock original series streaming now.

So what finally pushed things over the edge? Missing muesli.

When there were no boxes of muesli to be found on the yacht during the breakfast service on drop-off day, a disagreement broke out in the galley between Aesha and Ryan about being prepared for charter guest requests. “But how many yachts have you actually worked on?” Aesha asked Ryan, who replied, “I don’t know, how many vacuums have you pushed, how many f–king frying pans did you flip? You stick to vacuums, I’ll stick to cooking.”

That discussion definitely didn’t go the way Aesha had hoped, as she expressed in an interview during the episode. “I just handled that so uselessly. What I had meant to say was, ‘Hey, Ryan. These guests are paying thousands of dollars to be here, so could you please put just a little bit of time into their very simple breakfast request?” she said. “But within two sentences, he somehow flipped it and turned it into a completely different conversation.”

Well, it looks like we’ve finally found something that Aesha and Ryan can agree on, as the chef also believes the chief stew should have taken a different approach in that moment. “She just kinda comes in, again, with an arrogant question. Instead of, like, you know, communicating it in a way, it’s just, I think her choice of words [was] poor,” Ryan recalled during an exclusive interview with The Daily Dish last week prior to the episode’s release. “She kinda came in at a time where I was probably, may have been already frustrated, and I don’t think she approached it properly.”

Ryan said he felt like there was tension with Aesha from the very minute they met at the start of the season (clip below). “Can you recall Episode 1? What was one of the first things she said to me? ‘What kind of person — are you cheffy?’ So, I’m pretty sure arrogance started with her,” he said. “I mean, I didn’t go in there and ask her, ‘What kinda chief stew are you? How many boats have you worked on?’ So, I’m pretty sure she set the tone. Actually, I know she set the tone, and it really impacted me from day one on having to work with her.”

Start Watching the Premiere of Below Deck Down Under Now! Create a free profile to get unlimited access to exclusive videos, sweepstakes, and more!

“So, my arrogance was stemmed by her,” Ryan concluded.

The chef and chief stew need to have a close working relationship on a yacht, but that was difficult to develop with Aesha this season, according to Ryan. “I don’t think she was a team leader. I don’t think she was a team player. Is she good at her job? Maybe as a second stew, where she has some direction. Was I the best? Absolutely not. I had my downs. I totally did. There’s plenty of meals I wasn’t happy with. Things that I did that I wasn’t happy with, and I’ll be the first person to tell you, but there’s a difference,” he explained. “Working with her was not easy, and she did not try to do anything to make it easy.”

Though we’ve often seen conflict arise between the chef and chief stew on Below Deck over the years, Ryan said that hasn’t been his experience while working on yachts. “I can’t say that I’ve had problems with chief stews. We’ve butted heads, moved on,” he said. “Like, Tumi [Mhlongo] and I’s relationship, every day was a new day. We could butt heads and argue, but at the end of the day, it was, you know, we started a new day.”

While speaking with The Daily Dish, Ryan mentioned a recent interview he saw with Aesha, in which she said something to the effect of “I worked on many boats, and there’s always a problem with the chef,” as he paraphrased it. He said he wondered, “Is she the common denominator, or was it really me?” 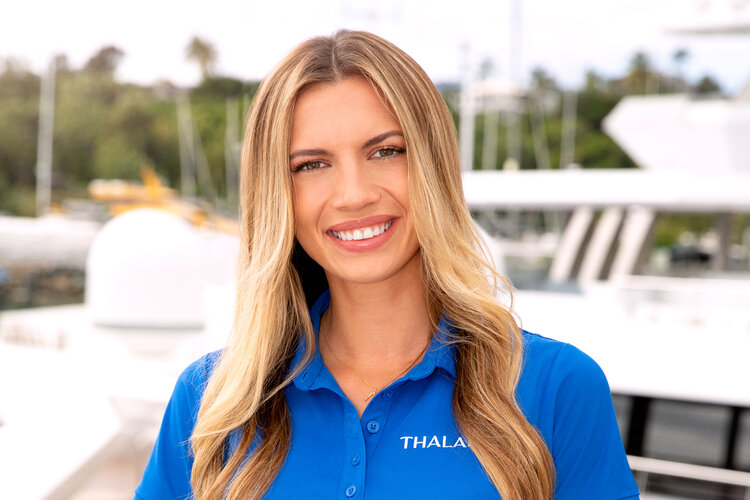 In fact, Ryan said he is “very well loved by everybody that I work with.” And though he said that he and Aesha are “absolutely not” in touch these days, the chef noted that he is still friends with the rest of the Thalassa crew. “Magda [Ziomek] has stayed with me for a minute. Jamie [Sayed] just left this morning. Benny [Crawley] was just here. Tumi’s, like — I hang out, I communicate, I speak with all them except [Aesha],” Ryan shared.

The chef said he’s also heard criticism of his cooking this season from some Below Deck Down Under fans. “Oh, I mean, the trolls are miserable,” he said.

In particular, viewers have taken issue with some of the dishes the chef has chosen to prepare for the charter guests. However, Ryan said he followed the guests’ “preference sheet to a T” while planning his menus this season. “I give my guests what they ask for at the end of the day. That’s my job. So, I’m getting a lot of hate saying I made tacos, I made burgers, but, hey, the end of the day, they put it on their preference sheet. That’s what they asked for,” he explained. “That’s what they requested, and I’m getting heat because somebody chose to go and serve tacos in white gloves? I mean, who made that decision? So, it’s my tacos [that are being criticized], not that you look like a complete you-know-what serving tacos with white gloves.” Create a free profile to get unlimited access to exclusive videos, sweepstakes, and more!

Luckily, Ryan has been able to connect with other members of the Below Deck family, such as Below Deck Sailing Yacht chef Marcos Spaziani, some of whom have offered up advice on how to handle negative feedback from fans. “They pop through your DMs and tell you, you know, don’t worry about the trolls and things like that. So we’re all kinda there supporting each other, which is really cool,” Ryan said. “Everybody kinda shows their support where they can. So, I’m really appreciative.”

These days, Ryan is living in Miami full-time while continuing to work as a chef on a yacht. “I’m still employed full-time by my same employer, and he gives me a great life. I have a blast,” he shared. “I’m pretty close with them. We have some fun.”

In addition to exploring some restaurant opportunities, Ryan is also working on launching a podcast called Yes Daddy in June. “It’s gonna be interesting. Real raw, real fun,” he said. “So, look forward to getting some feedback from people.”

When it comes to what the Below Deck Down Under chef is cooking up for the future, Ryan said, “Everybody’s just gonna have to stay tuned.”

Below Deck Down Under is streaming now on Peacock with new episodes available every Thursday.